The Los Angeles Regional Water Quality Control Board (Regional Board) is developing a new regional permit to cover Ventura and Los Angeles Counties and all the incorporated cities therein. The regional permit, once adopted, will supersede the three Orders that currently cover the Permittees in the region, R4-2010-0108 (Ventura County), R4-2012-0175 (Los Angeles County except for the City of Long Beach), and R4-2014-0024 (City of Long Beach), except for purposes of enforcement. The Regional Board released the tentative Regional Phase I MS4 National Pollutant Discharge Elimination System Permit (Tentative Regional Permit) for public comment on August 24th and comments were due to the Regional Board by December 7, 2020. Information on the upcoming Regional Permit is available on the Regional Board's website under "Regional Permit (in development)".

The current Ventura Countywide Stormwater Permit Order No. R4-2010-0108 was adopted in 2010 for a five year term. The Permit expired on July 8, 2015, but is on administrative extension until a new Permit is adopted. The first step for all Stormwater Permit renewals is the submission of a Report of Waste Discharge (ROWD). The ROWD summarizes the accomplishments and challenges of the Permittees under the current permit. The ROWD was submitted to the Los Angeles Regional Water Quality Control Board (Regional Board) in January 2015 and is available here. 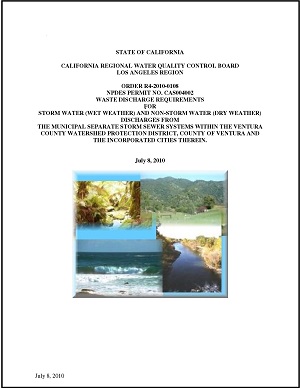